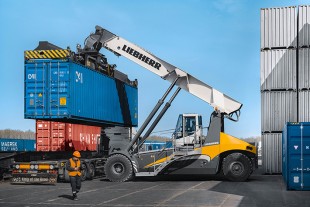 Since its opening in 2013, the Freight Village Kaluga, located in the industrial area Vorsino in the southwest of Moscow, has been one of the most heavily frequented multimodal transport & logistic centres in this region. On a total area of around 500 hectares, the high-performance rail terminal handles up to 500,000 TEU annually. In order to ensure efficient container handling, the freight centre has been using Liebherr reachstackers for two years now. At the beginning of 2019, the management decided to expand the fleet by two additional Liebherr LRS 545-31 reachstackers.

In addition to its sophisticated technology, Liebherr was also able to impress with a particular short delivery time. Only three months passed between the initial negotiations and commissioning of the two new LRS 545 at the Freight Village site. Despite the 24/7 operation, the machines still operate fully efficient even after 12,000 operating hours. One reason for this is the excellent service provided by Liebherr-Russia OOO.

The vast majority of reachstackers offered on the market operate with an outdated mechanical drive system. This type of mechanical power transmission has not been further developed for many years and is therefore no longer up to date.