The HeidelbergCement AG cement works in Schelklingen, Baden-Württemberg, has invested in a new rotary kiln system 68 metres in length. The main challenge in the project was to hoist the five components of the rotary kiln up to a height of 11 metres in a restrictive space. A Liebherr LR 1350/1 crawler crane from Belgian crane and heavy haulage contractor Sarens managed the job with aplomb. Furthermore a new Liebherr mobile crane is on the way to the Australian branch of the company. The new 8-axle LTM 1450-8.1 was ordered as a result of good past experience with crane manufacturer Liebherr. 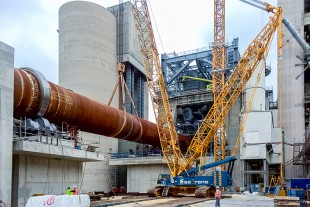 Finished – all the components are assembled to complete the rotary kiln.

The cement works is replacing its two existing rotary kilns to meet more stringent EU directives relating to emissions. Initially there were plans to use a 600-tonne class crane as a result of the planned component weights. However, due to the restricted space and the storage capacity in the plant, it was only possible to use a 350-tonne class crane. Sarens received the order to hoist the various rings using its LR 1350/1. The Belgian crane contractor set up the 350-tonne crane with a 42-metre main boom, a 27-metre derrick boom, as well as 85 tonnes of superstructure ballast and 75 tonnes of suspended ballast. After hoisting the components weighing up to 144 tonnes, the crane had to move around 20 metres on a specially prepared track so that the load could be positioned precisely for the installation work.

As soon as all five pipe sections of the rotary kiln had been positioned, they were aligned and welded together by fitters from Thyssen-Krupp. The finished rotary kiln ultimately had a net weight of 452 tonnes and was finished with refractory cladding so that in the future it will be capable of producing around 4500 tonnes of clinker every day. This clinker is then ground into cement.

Sarens is a leading global crane and heavy haulage contractor which provides creative solutions to challenges in the everyday heavy haulage and transport business. With more than 100 companies in 63 countries, Sarens is a global player with a fleet of around 1500 mobile and crawler cranes and currently employs around 4400 people.