The TCC 78000 Liebherr gantry crane is taking maritime crane technology in the Port of Rostock to a whole new level. This colossus of a crane has the capacity to perform extremely large-scale heavy-duty lifting operations. Its installation represents a major infrastructure enhancement for the Baltic Sea port and offers huge potential for the future. 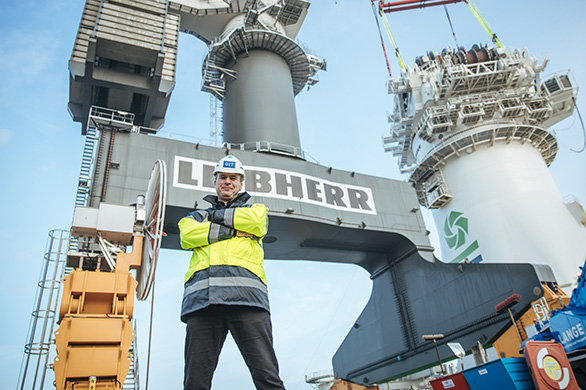 The people of Rostock are well accustomed to reports from the German Meteorological Service warning of extremely changeable weather. The forecaster on 12 December 2019 describes “a continuous stream of areas of low pressure which will blow both mild and cold sea air across the region”. This would not normally concern native East Frisian Keno Dirks a great deal. Keno was born and bred by the Baltic Sea and loves its harsh climate.

However, this morning is different – even the gentlest breeze is too much for the Project Manager from Liebherr-MCCtec Rostock GmbH. Wind, rain and fog are not welcome the day Keno is responsible for overseeing the manoeuvre of the upper section of a 1,400-tonne HLC slewing platform. The platform must be lifted 40 metres in the air and positioned with millimetre precision on top of the column of one of the largest offshore cranes in the world. This is the very first lift performed by the TCC 78000. Today, it is going to move a huge maritime crane onto the offshore installation vessel Orion. Liebherr’s new gantry crane has a maximum lifting capacity of 1,600 tonnes and a height of 164 metres. Its double bogeys, which are each powered by ten motors, are breaking new ground in maritime crane technology. 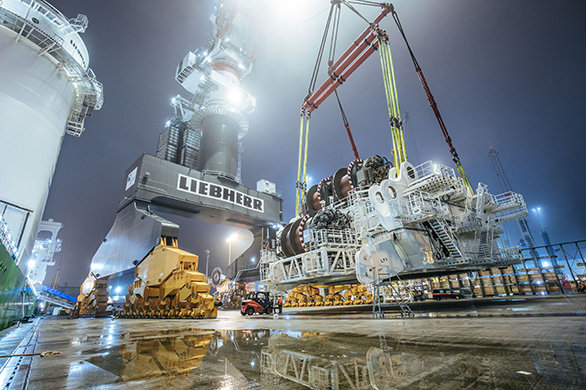 The power of patience

The lift is scheduled to start at 5.00 a.m. Everyone is ready, but it is raining and the wind is blowing swathes of mist in every direction. “We need to wait. We’ll get started in three hours’ time,” states a voice over the radio link. The message gives the men permission to take things easy for a while. Keno Dirks looks up at the TCC, “I’ve built a lot of very large cranes, but the TCC is bigger than anything I’ve ever seen. It makes me feel quite proud to think that I’ve been part of the whole build process from the very beginning.” At around 8.00 a.m. it’s time to get started. Dirk and the Liebherr team are good to go. 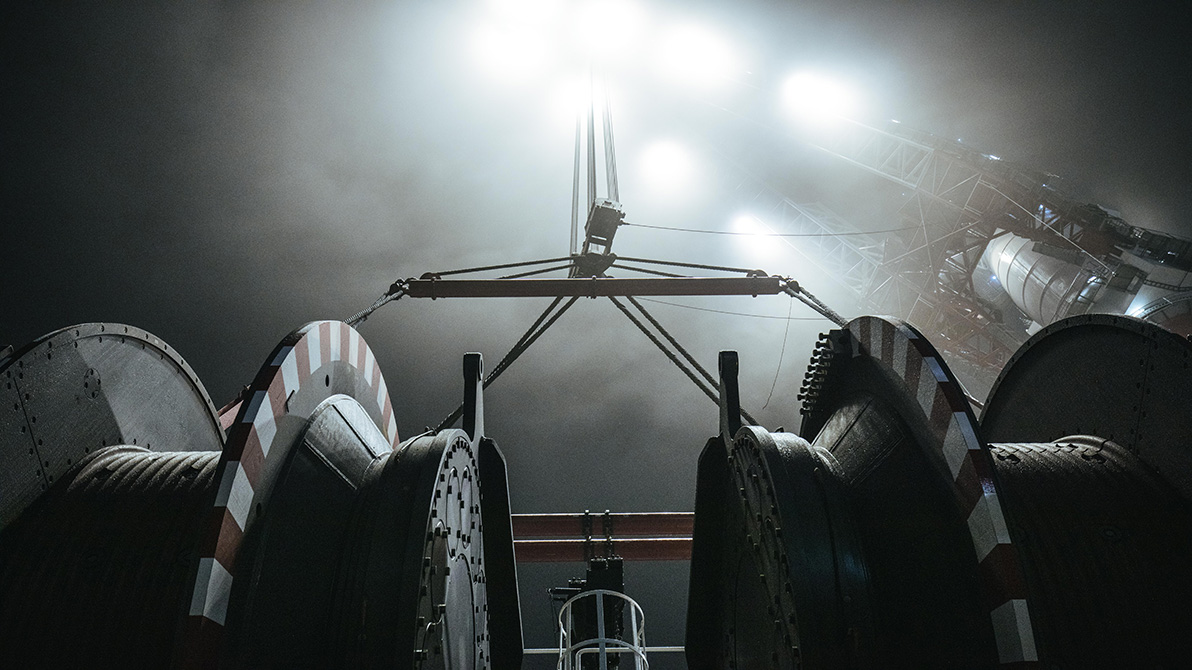 Going around the bend

The TCC 78000 has a maximum lifting capacity of 1,600 tonnes and moves along two double rails with a track gauge of 30 metres. This presents a challenge not just for the crane’s statics but also in terms of the section of the docks between the Liebherr factory site and the adjacent quayside that the cargo crane must move along. “We have built the gantry for the TCC 78000 so it is possible to transport full loads around the bend on the dockside, taking into account the high corner pressure and the lateral forces on the wheels,” Keno explains.

We are breaking completely new ground with our steel construction processes when we produce these components.

Extensive excavation work had to be carried out at the Liebherr works and harbour site before the crane could become operational. As Keno Dirks explains, “We have bored 612, 22.5-metre-long piles into the site. This means from about 15 metres deep the piles are positioned on top of a layer of high-load-bearing earth dating back to the ice ages. This is the first time this has been achieved anywhere in the world and ensures the crane is firmly anchored even under extremely high loads.”

It was necessary to draw on resources from a number of divisions when constructing and producing the new prototype. As Keno Dirks explains, “We had to pull together teams from both Rostock and our plant in Nenzing, Austria. We have never manufactured and assembled components on this massive scale before. We are breaking completely new ground with our steel construction processes when we produce these components. This puts us in a position to deliver even bigger and more powerful cranes that can construct and dismantle offshore wind farms and oil platforms.” 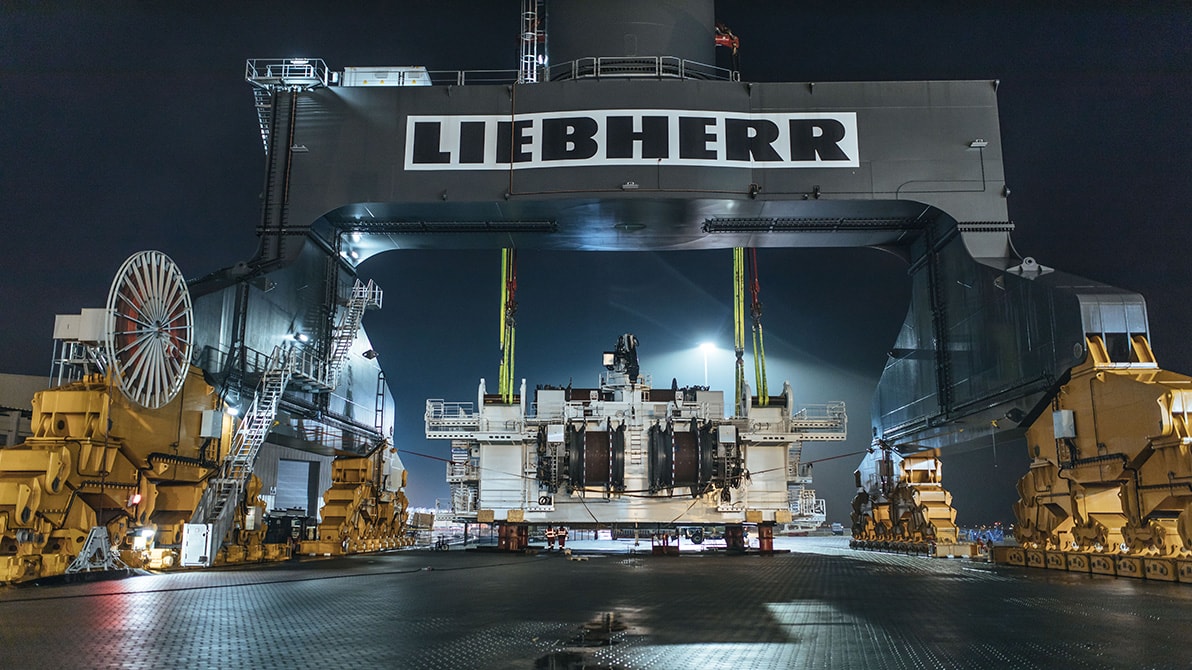 The job is completed when the Liebherr fitters screw the upper and lower slewing sections together on the column of the HLC 295000. There is more than one maritime crane record being broken this morning. The special offshore installation ship Orion represents a significant milestone for Liebherr-MCCtec Rostock GmbH.

The HLC 295000 heavy-duty crane installed on the ship is the most powerful offshore crane Liebherr has ever built. “Bigger, more powerful and more versatile: these are the challenges that maritime crane construction needs to meet now and will also have to in the future,” explains Udo Wosar, Head of Cargo Management at Liebherr Maritime Cranes. Udo and his team are responsible for loading all kinds of maritime cranes. “In the past, we had to use external handling technology and expensive floating cranes to transport large cranes by sea. The TCC 78000 provides us with completely new options for assembling and shipping complete, pre-assembled and pre-tested machines,” he explains enthusiastically. 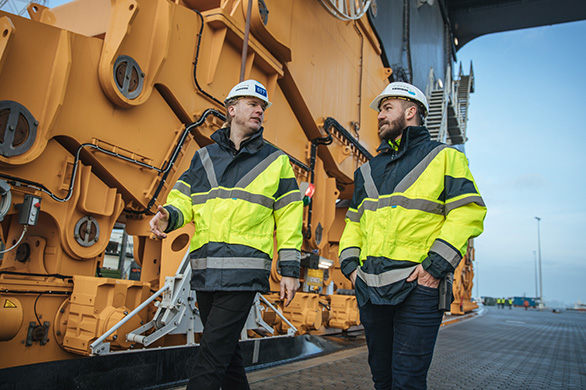 Rostock is on the up-and-up

The TCC 78000 will be regularly used by Liebherr and it will also be available to other companies that handle heavy-duty loads at the Rostock deep-water port. “This will have a positive impact on the whole of the port of Rostock,” Udo Wosar explains. And there is certainly plenty of demand. “Rostock is a booming production, logistics and service port. Our cranes are part of the port’s success.”

At the shipyards of Rostock and in nearby Warnemünde, increasing numbers of cruise ships are under construction for the Asian market and numerous wind-energy companies are busy constructing large onshore and offshore wind turbines. Udo points out that there is a huge demand for high-performance crane technology. “It feels good to be able to use all our Liebherr expertise to help create a promising future here in Rostock, whatever the weather has to throw at us,” he explains. 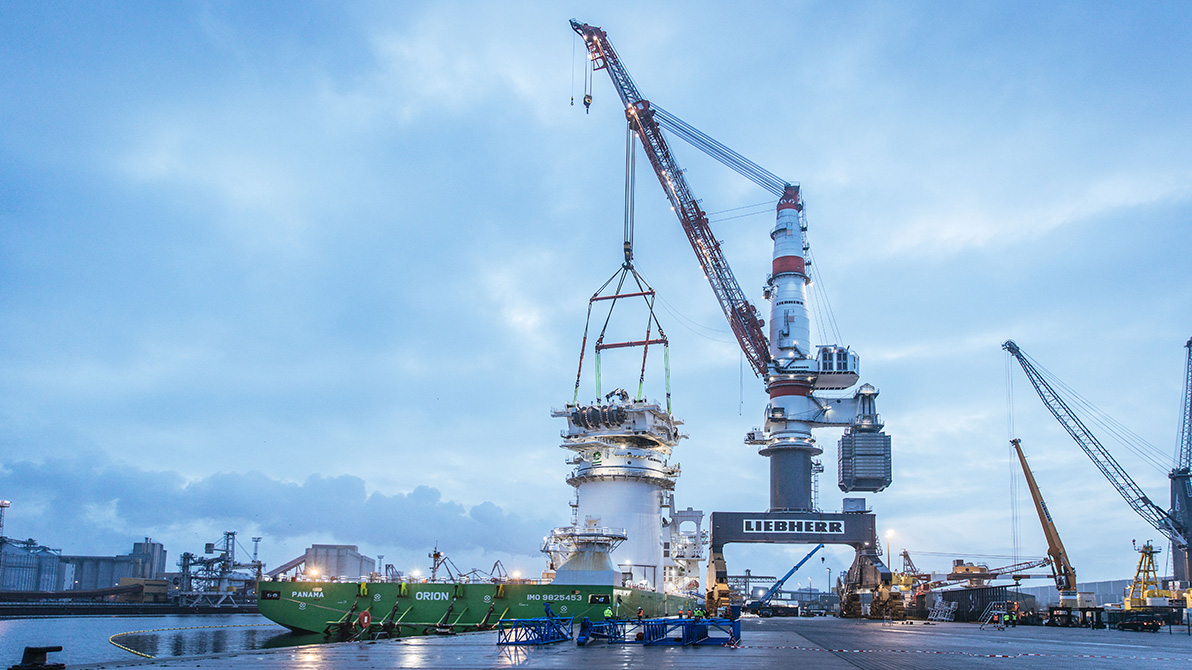 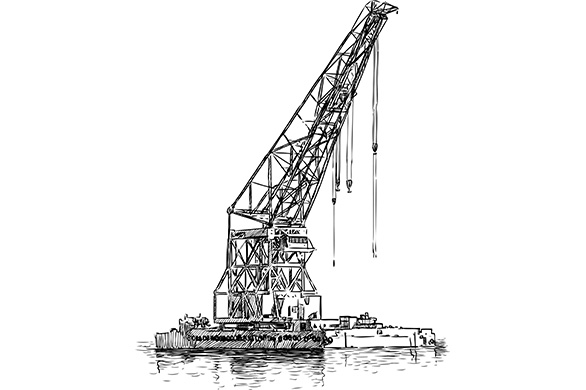 All the ingredients for a perfect lift: a short history of the dockside crane

Cranes which help to lift extra-heavy loads have a firm place in human history. The first written evidence of a crane that was used to increase human lifting capabilities using cable pulleys can be found in Aristotle’s Mechanica.

The Romans applied Aristotle’s physics concepts when developing the tread wheel. The invention of the polyspaston crane increased the lifting power of one worker to 3,000 kilograms, improving on the ancient Egyptians’ achievements by a factor of 60.

The Roman treadwheel crane was used at medieval ports across Western Europe in the 13th century in the form of more advanced gantry and tower cranes, which were used for the first time to load and unload shipping cargo. Unlike their ancient predecessors, these cranes could achieve both vertical and limited horizontal lifts with the help of new swivel mechanisms.

A large number of people would be involved in the operation of a pre-industrial treadwheel crane, including an authorised crane master who was employed by the person renting the crane or the city council. He paid the workers (including a crane clerk and a rope greaser) and instructed the 15 to 20 longshoremen, carters, windlass and winch operators, wheel turners, crane treaders and workers.

Steam-powered crane systems had already been developed for merchant shipping in England a few years before. In 1866, the Port of Hamburg was operating 186 steam harbour cranes, which could generally move loads of between 1.5 and 2 tonnes. Some heavy-duty steam cranes could lift up to 5 tonnes.

In 1891, the Port of Hamburg brought into operation the world’s first electric harbour crane at the area of the docks called Peterskai. This was the first crane that could be operated by one worker. The arrival of the electric crane swiftly brought the age of the steam-powered crane to an end. By 1910, there were over 350 electric dockside cranes operating in the Port of Hamburg.

The language of the docks

You need to know all the tricks of the trade and master all the key terms if you want to join in conversations at the dockside. This is not very easy as many of them can be quite ambiguous. Test your knowledge of the language of the docks with Keno Dirks:

1 What does the word 'löschen' (to quench in English) mean?

2 What does the German word 'Watt' mean?

4 What does the German word 'Kiel' mean?

5 What do you think the German word 'Umschlag' means?

6 What do you associate with the word "knot"?

The TCC 78000 with its 1,600 tons of load capacity is a technical masterpiece. Here you can learn more about the design and construction of the gantry crane.

To the product page

The year 2019 in figures: In our infographics you can find the most important key figures for the year, technology topics Liebherr is working on and more at a glance.