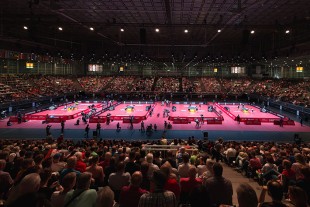 Even before the final rounds on Pentecost weekend, the Liebherr World Table Tennis Championships 2017 in Düsseldorf can be regarded as a complete success. Every day, the tournament matches have entertained thousands of spectators in the breathtaking World Championship arena, along with several hundred million fans watching on television around the world.

In Düsseldorf, table tennis has presented itself as a fascinating and modern sport with both victorious and tragic heroes, with spectacle and show. Against this background, the new "Liebherr Live" presentation format has made a successful debut and provides hope that the popularity of table tennis will continue to increase, including among young people.

The important happenings in Düsseldorf also included the re-election of Thomas Weikert as President of the International Table Tennis Federation (ITTF). The presidency of the German has been outstanding thanks to the successful marketing strategy of his management team combined with transparency and good governance.

Announcing shortly after the election that he will not stand for office beyond 2021, the former President of the German Table Tennis Association (DTTB) will continue on the course he has already set for himself - and lead by example. Mr. Weikert has thus also strengthened his position regarding the intended reforms and other changes at the ITTF. The head of the Federation lends his arguments a high level of credibility combined with the ability to make things happen because he will not have to worry about voting intentions and opinions ahead of any future election.

Mr. Weikert's election success rounds off the performance of the German hosts. The DTTB team was able to win the medal it was hoping for even before the last three days of the World Championships, thanks to the success of Petrissa Solja in the mixed doubles alongside Chinese competitor Fang Bo. It is also pleasing to see that Timo Boll will certainly be able to hold his own at the top of the sport for some years to come and that the DTTB can therefore expect to head to the 2020 Olympics in Tokyo with a strong team.

The expected dominance of the Chinese players also came to pass in Düsseldorf. And in fitting with the reputation of the World Championship host city as the biggest Japanese "colony" in Europe, the Japanese players also impressed with their performance. China thus has a rival to be taken seriously, and not only due to the unbelievable performances of 13-year-old up-and-coming talent Tomazu Harimoto.

The tournament can be summed up in one sentence: after this year's World Championships 2017 in Düsseldorf, table tennis is fit for the future!