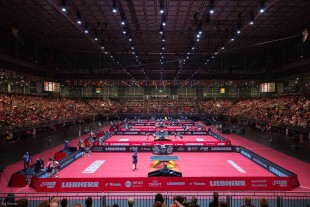 The Liebherr World Table Tennis Championships 2017 in Düsseldorf have proven to be a lively and cheerful event right from the start. Thousands of fans from near and far have taken the opportunity to get a close look at their idols like Timo Boll, Dimitrij Ovtcharov, Petrissa Solja or a Chinese superstar and Olympic champion like Ma Long who is rarely seen in Germany - and the fans are impressed.

Samira explained her reasons for visiting the Rhineland region: "I traveled here especially from Karlsruhe. The World Championships in Germany are something special and I didn't want to miss out." Samira, a soldier by occupation, is a big admirer of record European champion Timo Boll. As an active player in the regional league, she is also following the goings-on in the ladies' competition very closely: "There are actually some differences in gameplay between men and women, so I really want to take the opportunity to learn something from the female Chinese players." 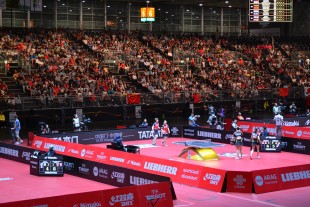 Retired couple Edith and Wilfried from the neighboring city of Neuss have been crossing the Rhine every day to see the action in the trade fair halls. "Our son is a keen table tennis player and convinced us to take in an event like this at least once", says Edith with a smile. The first days of the tournament have made a positive impression on the pair: "The hall is enormous in size, and the games are also exciting and interesting." The couple's sympathies lie with Timo Boll. "Our son says that Timo is a great player, so we have got our fingers crossed for him", explains newfound table tennis fan Wilfried.

Selina has discovered the secret that the second playing hall also has a lot to offer. "It is true that all of the stars play in the big hall, but in this small hall you are a lot closer to the action and the players", says the junior lawyer from Datteln, "and the gameplay is often just as good."

Sports student Florian from Potsdam found the entertainment he was looking for right from the very first two days of the tournament. "When you see all of the players from smaller table tennis countries in the qualification rounds, it gives you more motivation to really give it everything you've got." However, as the self-appointed "Timo Boll of the regional league", this amateur player has already seen success as an autograph hunter. "I have already managed to get autographs from all of the German players and from almost all of the Chinese players. They will take pride of place at home on my mantelpiece. Not to mention that there is a great atmosphere in the big hall - it's sometimes almost like being in a football stadium."