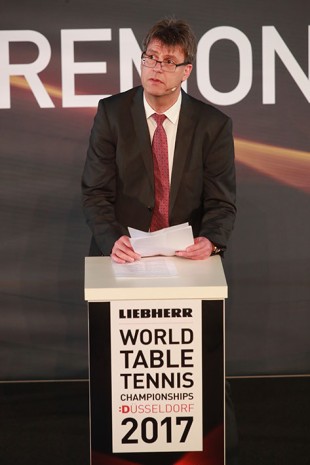 The Liebherr World Table Tennis Championships 2017 in Düsseldorf have begun. In a short ceremony, the President of the International Table Tennis Federation (ITTF), Thomas Weikert, declared the tournament open. The highlight of the roughly 90-minute ceremony attended by several hundred invited guests was the draw for the seeding positions of the 16 best players in the singles competition.

"Our World Championships have been consistently improving over the years. That's why I'm convinced we will reach new heights once again in Düsseldorf and set new standards", said Mr. Weikert in his speech at the Esprit Arena home of second-division soccer club Fortuna Düsseldorf.

Amidst the friendly atmosphere of the arena, Mr. Weikert also highlighted the efforts of the ITTF to encourage young up-and-coming players. "I hope that these World Championships will show children and young people around the world that our sport is fun and brings people together." In harmony with this motto, entertainment was provided with a performance from a teenage music group. They presented a self-written song with the memorable chorus "If not us, who? If not now, when?". 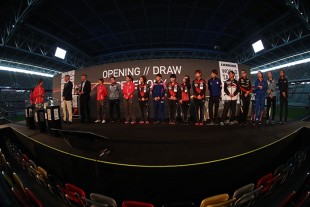 We gratefully received the ITTF President's acknowledgment of our renewed involvement as tournament sponsor: "Without your support", said Mr. Weikert to the Liebherr representatives in attendance, "a tournament of this size, and especially of such quality, would not be possible."

In his speech, Mr. Weikert again mentioned the massive media reach of the Liebherr World Table Tennis Championships 2017 in Düsseldorf. TV stations from 120 countries are broadcasting from the city by the River Rhine. Including social media, the ITTF is expecting over 400 million visits and views by the end of the World Championships.