Ma Long: I won't forget this final for as long as I live 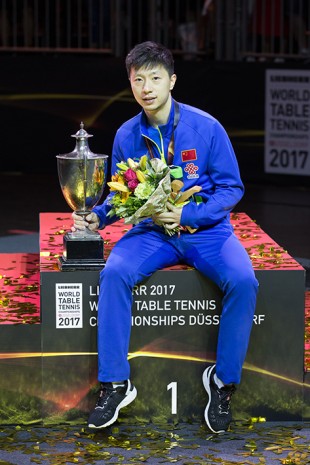 A truly memorable table tennis event brought the Liebherr World Table Tennis Championships 2017 in Düsseldorf to a worthy close. The gameplay of successful defending champion Ma Long and his opponent Fan Zhendong in front of 8000 excited fans took away the breath of everybody in attendance - experts and table tennis newcomers alike. "It was table tennis from another planet", was the unanimous opinion of all of the knowledgeable fans in attendance at the World Championship final.

The 4:3 victory of Ma Long, who knocked out Germany's best hope Timo Boll in the quarter finals, included all of the most fascinating aspects of this extremely high-paced sport: speed, precision, thrills, technique, inspiration and power. When Ma Long managed to convert his second match ball against his fellow Chinese national and fell backwards onto the floor in victory, the cheering fans could almost see the tension leaving his body.

0:1, 3:1 and 3:3 were the set scores from Ma Long's perspective, before the highlight in the decisive seventh set: Fan Zhendong was leading 9:7 and almost had his hands on his first World Championship singles title, when Ma Long managed to draw on all of his reserves of skill, caught up with his opponent and then took a turn down victory lane. 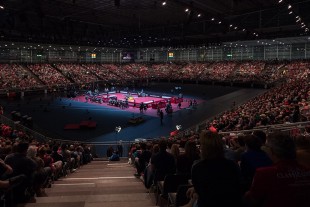 "This final", said the former and new champion shortly after the decisive point, "is something I won't forget for as long as I live. It was the craziest game that I've ever experienced." The 28-year-old also expressed his sincere sympathy for his opponent in the final, a player eight years his junior: "I know how he must feel. But he is still young and his time will come."

For Timo Boll, Ma Long was a worthy winner of the world title. The former world number one expressed his thoughts about his World Championship doubles partner following his quarter-final loss against the defending champion, a match which was just as hotly contested as the final, stating: "He is the true champion and really deserves his position at the top".

Ma Long's second title triumph at a World Championship tournament was the highlight of the event for several hundred Chinese fans in attendance and for millions of viewers in front of their screens. That's because the habitual champions once again underlined their dominance with four titles in five competitions - the "Middle Kingdom" was only denied success in the mixed competition