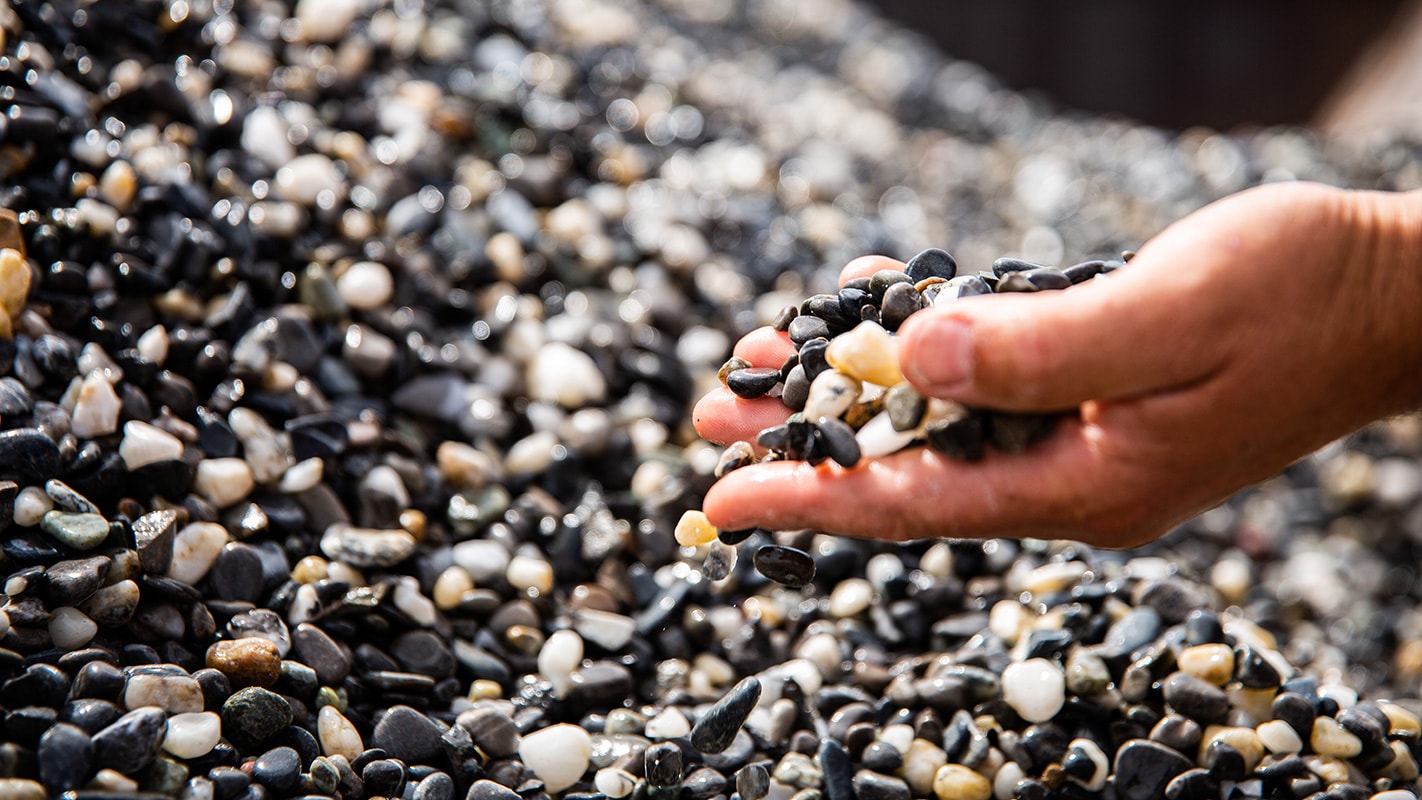 The journey of the stones

It is known for various sizes and colours, its origins and shapes lie in nature: gravel. Lake Constance is home to a great deposit of this resource. But until it gets there, it has to make a long journey from the Alps – set in motion by the power of water. 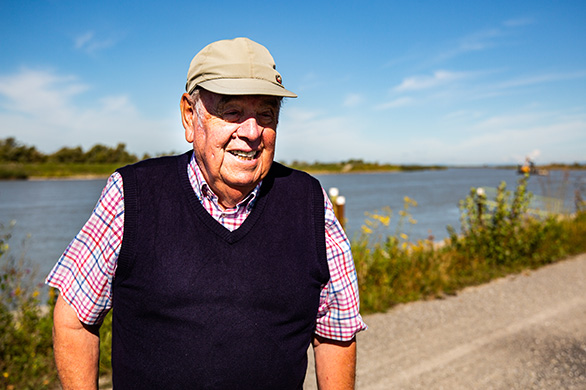 Resources from the Alps

Lake Constance lies nestled in between Germany, Austria and Switzerland. It’s Europe’s third biggest inland lake with more than 200 tributaries. The biggest one is the Alpine Rhine, with its mouth canalised by kilometre-long dams. 250.000 litres of water arrive here every second – and bring with them a sediment mixture of stone, sand and sludge.

Through the enormous forces of nature, up to three million cubic metres of solid materials are washed ashore and transported through the mouth channel of the Rhine into Lake Constance every year. The material sediments there and forms new land areas. Herbert Zech, managing director of the Zech Kies GmbH, once shovelled out the gravel out of these river mouths by hand. He recounts the journey of the stones – and his own. 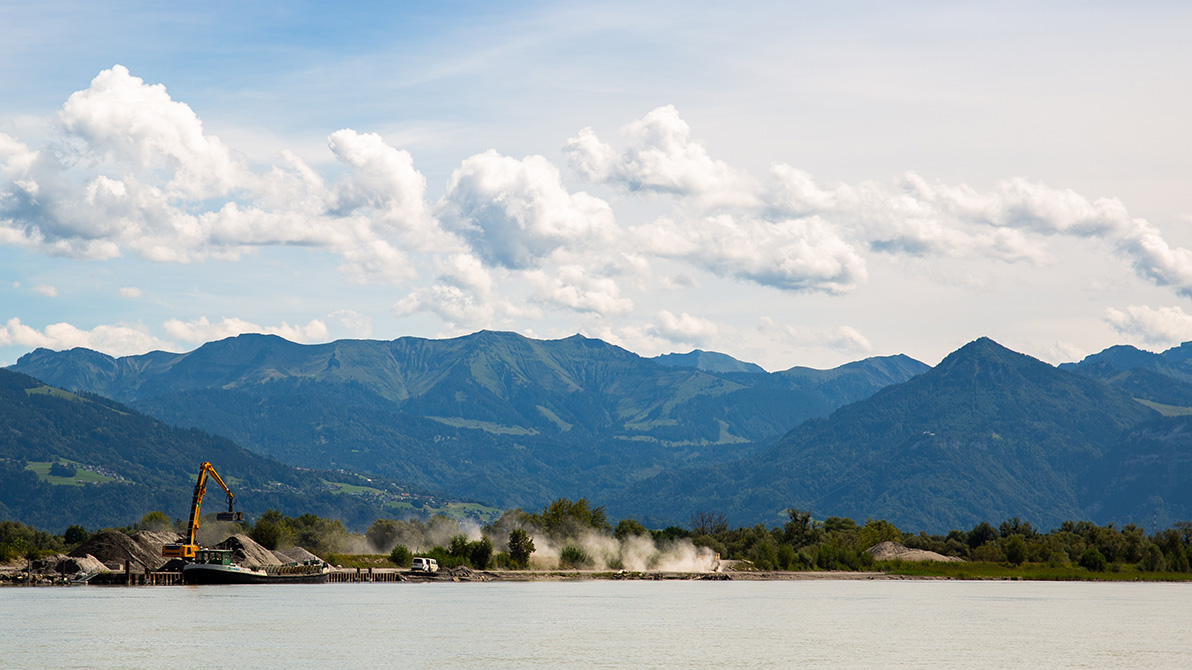 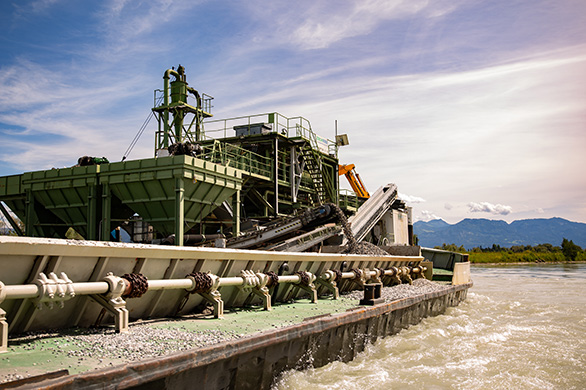 Herbert Zech realised early on that the Alps provide a permanent supply of the highly sought-after resource: “My life’s work began when I went to the agricultural school Mehrerau in Bregenz in 1954 and 1955 – back then, I wanted to become a farmer. At school, I learned that large amounts of sand and gravel could be found in Lake Constance and the Bregenzer Ach river and I knew that sand was a scarce good in the Bludenz region in the backcountry.“ His grand vision of becoming a gravel entrepreneur was born. He pursued his goal tirelessly in order to supply the market in Vorarlberg with raw materials for the concrete production.

A good line of business, but the way there was stony in every respect: “I can remember well how I bought the first lorry in 1957. I drove it to Lake Constance four times a day and shovelled out four cubic metres of gravel and sand by hand.“ Depending on the composition of the material, Herbert Zech loaded his lorry with around six to seven tonnes of gravel and sand every day and sold it in the Bludenz area. “This was my greatest achievement“, he comments on the laborious work. 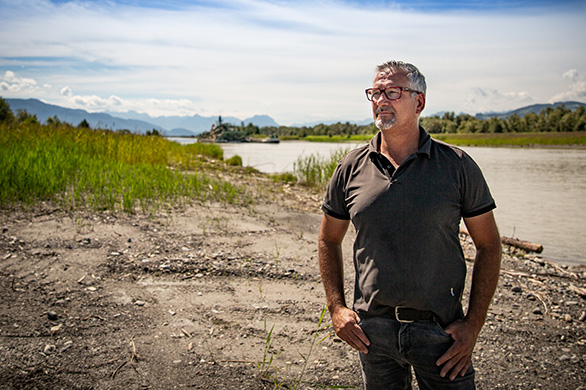 Today, the extraction of the material is considerably easier and faster. In the village of Hard, Austria, where the Alpine Rhine flows into Lake Constance, a plant’s machines have been running on high since the early hours of the day. The Neptun is the centrepiece of the Zech Kies GmbH and has been in operation since 1996. Here, conveyor belts and sifters extend over several levels to process the resource.

A R 944 crawler excavator extracts the gravel: it digs up the material with its spoon from depths up to four metres – around 1.500 tonnes are moved by the material handling machine and processed in the floating gravel plant every day. “The gravel is put into a feed hopper, dosed properly via a feed belt and washed. It runs over an S-conveyor and over the sifters, and once wood residues have been sorted out, the gravel is separated into various grain sizes“, Günther Meusburger, operations manager at Sandgewinnung (sand extraction) Hard, explains.

Not far from the Neptun, which is anchored by hydraulic stilts, sand is extracted on another pontoon, the Schesa. A R 946 crawler excavator extracts 1.500 to 2000 tonnes out of the Rhine dam every day. This requires reliable equipment, because the mixture of water and sand acts like sandpaper on the machine. The journey continues here: the around 100 years old ship Seestern (starfish) transports sand and the prepared gravel to the unloading point. This is where the plant’s latest addition is already waiting for the material: the material handling machine LH 40 Port Litronic – the first of its kind in Austria. It unloads the resources from the ship and handles up to 4.000 tonnes of gravel and sand daily. The operations manager is happy: “The machine is very flexible and fast. Since we handle such great amounts of material here, we need big and reliable machines.“

Once the gravel has dried after 24 hours, lorries take it to the gravel deposit or directly to construction sites. 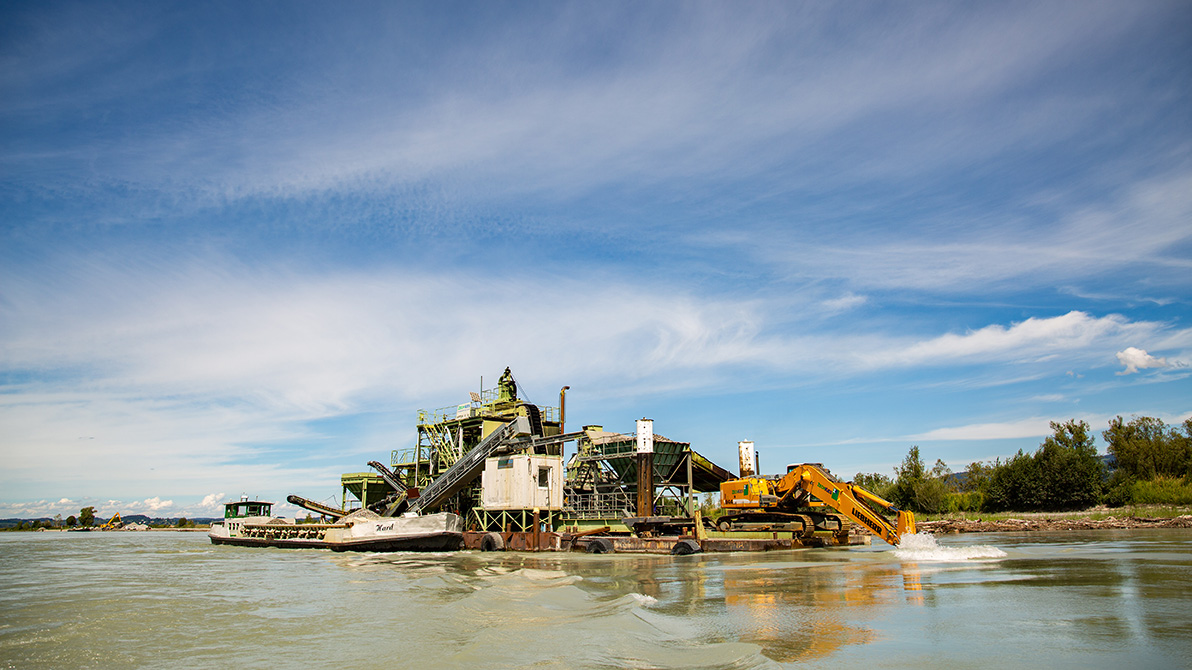 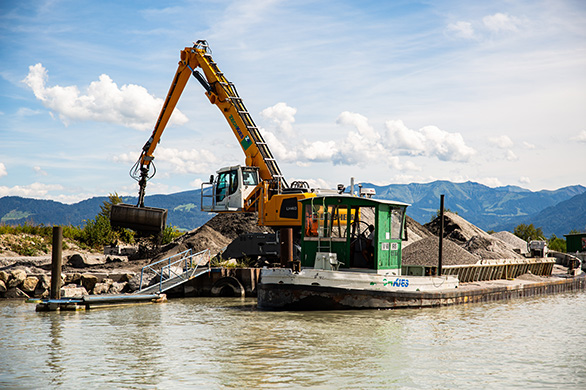 The end of a long journey

The gravel found between the Rhine dams is special in its appearance and texture: it mainly consists of Swiss material, meaning that it has a high proportion of the primary rock quartz – white rock to which the Rhine gravel owes its great popularity. And Swiss rock has another major advantage: due to the friction and rolling in the water, the edges are abraded, smoothened and rounded. As a result, the rock is harder and more robust, which leads to a greater durability compared to other kinds of gravel.

While walking through the Austrian state of Vorarlberg that borders Lake Constance, you can spot it everywhere – in gardens, on flat roofs or on paths. “Wherever gravel is laid out visibly, people usually ask for Rhine gravel due to its appealing looks“, Herbert Zech says, delighted. This makes it a popular resource, especially for gardening and landscaping: the Garten-Brunner GmbH from the neighbouring village of Höchst, for instance, relies on gravel from Lake Constance for its garden and landscape designs.

Every year, Liebherr excavators on both the Neptun and the second pontoon extract up to 200.000 cubic metres of bedload out of the Alpine Rhine – this is equivalent to five to ten percent of the total amount of the material. By carrying out this dredging work, Zech Kies GmbH contributes to the upkeep of the landscape of Lake Constance: “If the bedload is not taken out, it piles up, fills the whole basin and creates islands“, Herbert Zech explains. In years that are extremely dry, these islands keep appearing close to the Alpine Rhine mouth. Thanks to dredging, the water can flow into Lake Constance more quickly and sedimentation at the river mouth can be slowed down. At the same time, the risk of flooding is reduced. Nevertheless, experts estimate that the bedload from the Alps will silt Lake Constance completely in about 15.000 to 20.000 years from now. But until then, a lot of water will still flow down the Rhine.

The path of the stones from the Alps to Lake Constance

Station 4: At the Rhine dam

Station 6: Areas of use 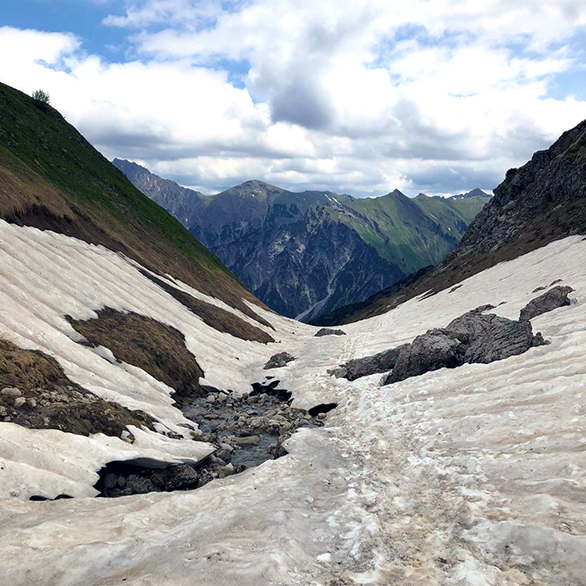 The origin of debris: Alpine glaciers

The journey of the gravel begins in the Alps. As the snow melts, debris starts to move. Debris is the term used to describe rock material that is transported by a glacier, often as far as down into the valleys. It is made up of solids such as sand, stones, pieces of rock and sediments, which are rolled along the bottom of rivers and streams by the flowing water. This rolling motion rounds off the larger, coarser rock material and finally turns it into gravel. 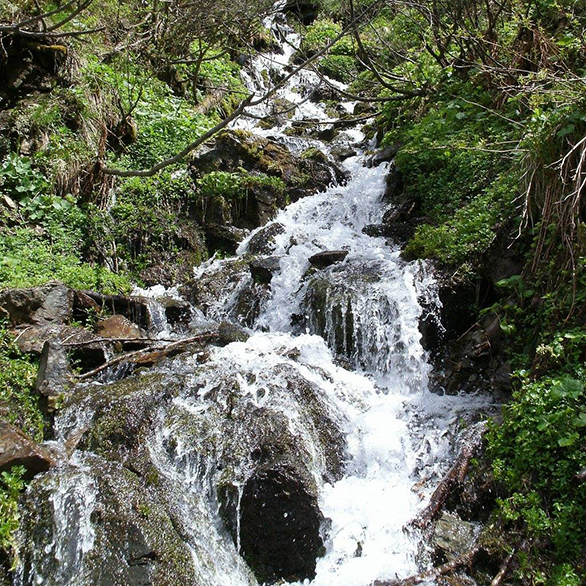 Transport of the debris through mountain streams and rivers

The water makes its way through winding valleys, rocks and narrow gorges, driving the debris forward. Especially firedamps and floods in the mountains lead to large quantities of debris, which are carried along by the enormous force of flowing water. This is where the Alpine debris turns into bedload. More than 200 tributaries transport the rock in the direction of Lake Constance. The bedload travels up to 100 kilometres from the mountains before it reaches the lake. The largest tributary of Lake Constance is the Alpine Rhine, the section of the Rhine that flows from the confluence of the Anterior Rhine and Posterior Rhine in the Swiss canton of Graubünden into the lake. 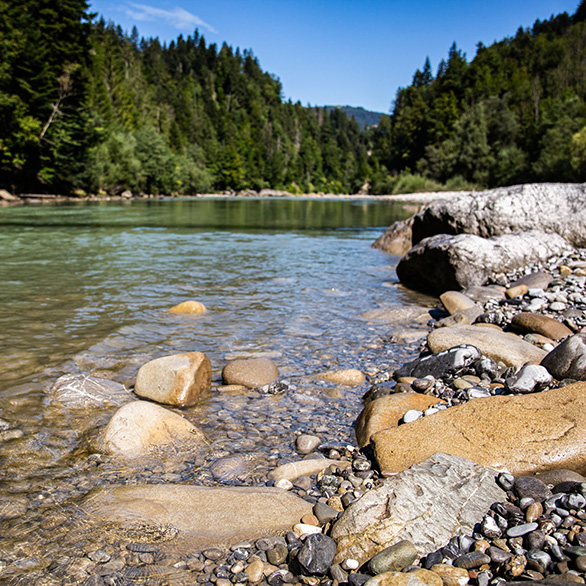 Over the course of time, the Alpine Rhine has changed immensely: in prehistoric times, today's Rhine Valley was a glacial landscape. The melting of these glaciers and a combination of other factors led to the formation of Lake Constance, which still covered the entire Rhine Valley area back then. The bedload carried by the Alpine Rhine and other tributaries gradually deposited in the valley, increasingly filling it up and thus causing a steady decline in the area of the lake. For a long time, the Rhine was able to expand freely: bedload and sediments deposited and caused further siltation, swamps and lakes were created – the danger of flooding was omnipresent. 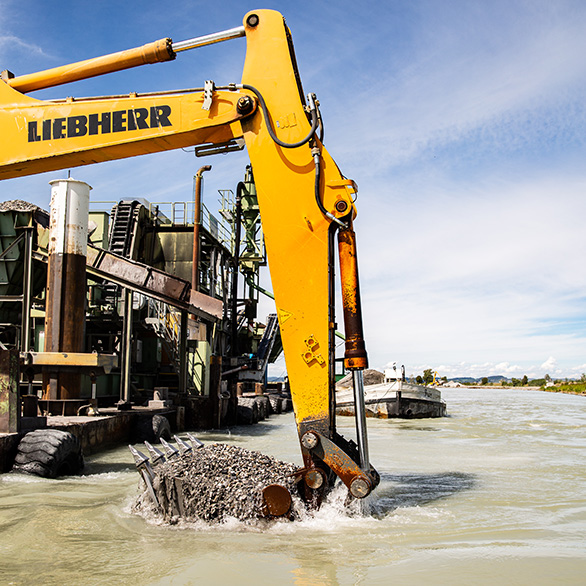 The bedload reaches Lake Constance after a long journey

Since the 19th century, the inhabitants of the Rhine Valley have increasingly called for flood protection. In order to increase the capacity of water and bedload flow, the course of the Rhine has already been modified several times and widened in places with the help of rectification and dam building. To act against the silting up of the mouth of the Alpine Rhine, construction work began in the 1980s to extend the Rhine dam into the deeper parts of Lake Constance – and it continues to this day. The kilometre-long dams partially transport the bedload directly into Lake Constance, where it deposits. The bedload mainly consists of mud and fine, loamy sand – so-called suspended soils. 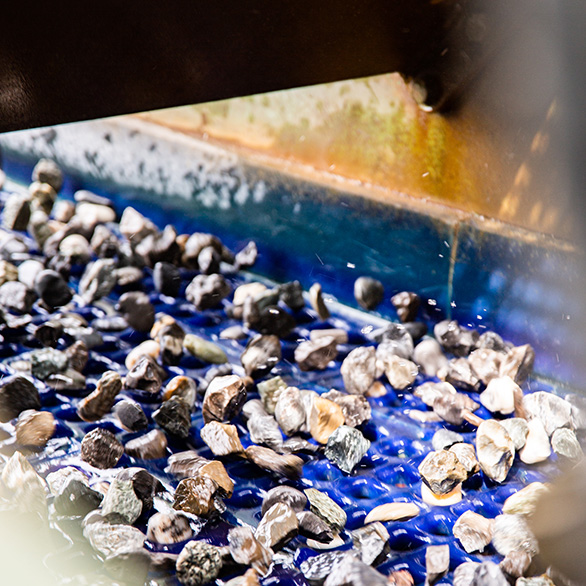 Gravel extraction on the river

The remaining bedload – gravel and sand – is not washed into Lake Constance and has to be extracted at the Rhine dam. This is where Zech Kies GmbH’s uses Liebherr machines to extract it by dredging. This is also done for better flood protection and delays the sedimentation of the Alpine Rhine mouth. On the floating plant, the gravel is separated from other sediments and wood residues. The gravel is then cleaned and divided into the different grain sizes by sifting. The grain size indicates the size of the individual stones. During the gravel extraction on the Neptun, they are sorted into grain sizes of 4 to 8 millimetres, 8 to 16 millimetres and 16 to 32 millimetres. Larger stones are called oversized grains. They run separately into a silo, are fed into a crusher and then returned to the rest of the material. 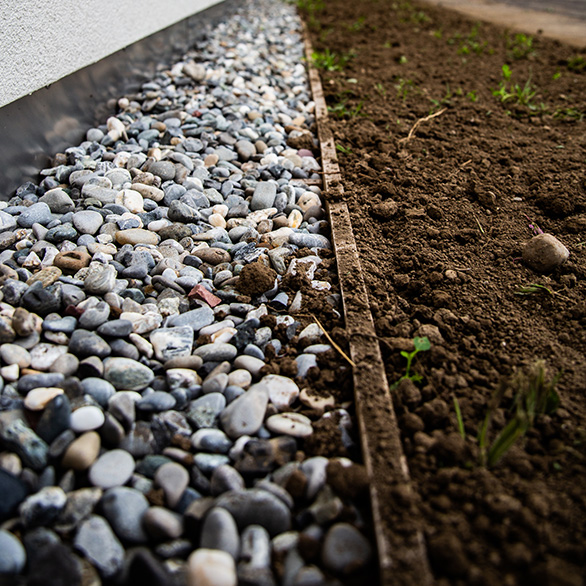 The gravel’s long journey ends in gardening and landscaping

From the Neptun, the gravel is transported to a warehouse or directly to construction sites. Grain sizes of 4 to 32 millimetres are not only used in gardening and landscaping, but also as additives for concrete production. While flat roofs, for example, need to be covered by grain sizes between 16 and 32 millimetres, sizes of 8 to 16 or 16 to 32 millimetres are used when seepage lines are laid. Because of its high proportion of white quartz rock, the gravel extracted from the Alpine Rhine dam is particularly popular in gardening and landscaping. And its long journey ends right there, as edging for flower beds, as paths in parks or as playground covers.

Digitalisation disrupts and transforms how companies will operate in the future. How does a diversified Group like Liebherr deal with this shift? 5 questions for Kjeld Jespersen from Liebherr-International AG.

The new LH 40 Port material handling machine was designed especially for mixed cargo in port handling operations and is distinguished by extremely high load bearing capacities while, at the same time, having a very long reach.

In this section you can find stories around exciting topics from the Liebherr Group.